I fail to understand the impulse of some folks who doggedly try to exactly copy the playing style of the famous old bluesmen. I come across “tuition” in this regard through my lurking around some of the guitar forums out there. Lick by lick, folks slavishly copy the accents and even the supposed disposition of the fingers (passed down through the decades by some expert, or student, or by hearsay”¦) Surely this is the musical equivalent of painting by numbers? Better by far to put on a recording of one of these masters and play some air guitar – far more convincing.

Early morning this Wednesday very benign with blue skies and a trail, or two, of cirrus. I haven’t heard a weather forecast so I don’t know if it’s a lull before something. Also warm for the north-east of Scotland and the time of year. (Hey – I’ve just checked the spelling of “cirrus” and found that the word also refers to the male copulatory organ of flatworms and various other invertebrates. Guffaw, guffaw.)

These two have been around for a bit, now. I Don’t Think So is a new song, ie., it was written less than a year ago. Po-Faced used to exist under another name more than 30 (three-zero) years ago and has been recently resuscitated. Mucho changes. It (Po Faced) used to be a nasty, leering and disreputable piece that I had no right to put on an LP – which I did. You might ask “Why dig it up again, then?”. Well, the guitar part is fun so, despite misgivings about rewriting a song already committed to vinyl, albeit more than 30 (thirty) years ago, I’d decided to give it a go. The result is still not particularly heart-warming and spirits-lifting (something about the tune?) but – whatyagonnado?

I Don’t Think So doesn’t suffer from that historic baggage of course – in which case, I need another rationale for it’s gloomy aspect. Actually, I’m foolin’ with you: it’s full of wit and humour and wry irony and other stuff like that. Well…

While it’s not a stone-cold certainty these will get on the CD, they are in with a chance.

I’ve posted them on some sites to get some feedback and they’ve been there for while. As they say, here be the links (again):

Po Faced
I Don’t Think So

Yes: “Noodles”. As in noodling on the guitar. I was going to call this section “Songs” but that presupposes a section on finished articles which would be as interesting as stripping paint – to write about, anyway.

Most of everything comes from noodles. Not always as haphazard as just moping about the fingerboard though – not always – not even often. Mostly I’m sitting with the guitar with a purpose and a bottle of wine. It could be about trying to get a new and weird scale settled in the muscle memory or finding more shocking ways to move from one key (tonality) to another key (tonality). I keep meaning to write the results of the latter down but rarely can I be bothered to get up and get a pencil and manuscript. But all this is done in a fairly relaxed manner (wine) and I’m happy to venture off if I stumble across something worth exploring. I might find a song, thereby.

The point being that it’s more interesting considering noodles and what comes from them – looking forward – than me writing about, and you reading about, a complete song – looking backwards. I thinks so, anyway. At least, I think I can write here, as I go, about that stuff more easily than the retrospective thing about some song that is more or less done and dusted – or consigned to the trash.

So henceforth I’ll try and be particular and be interesting…

Well, it’s the working title of the new project which in time will be a CD. To call it something at this stage gives it some “personality” which may influence the content. I’ve already got a few songs earmarked for inclusion some of which are already recorded and exist on my hard drive as scratch mixes. A couple are even on the song page of the main site and posted elsewhere on the ‘net. (Also see above.) There’s also a couple that are just written which need to be practiced up and played in public before I’ll be convinced about their inclusion. More of this anon.

I’m even toying with the idea of staying with the outdoors feel for CD booklet art and keeping with the courier font for the written content. This just appeals to my sense of these CDs being the component parts of an overall project. Maybe this is not the right way to go. We’ll see.

The following is a copy and paste of something I wrote on an internet forum, not too far from here. I repeat it here ’cause it’s fundemental to my recording practice and might be of interest to my fellow guitarists and weekend warriors in the studio…

I read a lot of huffing and puffing about acoustic guitar recording strategies, and, to be honest, it caused me a lot of heartache for a while. I describe below how I ended up for my new CD, and beyond. (Note this is primarily intended for solo guitar, or guitar and vox, tracked separately.)

I’m afraid I’ve given up entirely on spaced mic techniques for guitar recording. I only use X/Y setup with small diaphragm condensers. (I would try mid-side, but I don’t have a figure-8 mic.)

My reasons for my X/Y setup are three-fold:

1. When I listen back through a hi-fi system at normal listening distance, a guitar recorded with a spaced technique sounds unrealistically big – in fact it sounds about 12ft wide! This might sound impressive to some, but it makes me nauseous.

2. Phase cancellation. No matter how big it sounds in stereo, if I hit the mono button on the recording console, the middle of the guitar disappears leaving the sides hovering disembodied in space. More nausea. (Maybe that has more to do with my skill at setting up a spaced pair, but for the other two reasons, It’s now academic.)

3. To a listener in an audience any further than 6 feet away, the guitar is a mono source. Any stereo information is by virtue of room reflections.

So this is how I proceed: I use two Neumann KM 184s in the X/Y configuration, about 18″ from the guitar. These mics aren’t matched, but I don’t consider that so important. (Sidebar: I had actually recorded more than 30 guitar parts using ORTF before being forced to admit it wasn’t going to work for me and had to abandon them and start again using X/Y.) Now, (some folks say that) X/Y can appear to give a very tight stereo image, but it truth I find the image more realistic – and anyway, if the image needs a bit of stretching I can use a bit of mid-side processing.

The future? I’m considering getting a figure-of-8 and do some M/S for real for the next record. Or two, and do Blumlein. This gear purchasing never stops…

(Now an A/B setup with mics pointed at saddle & neck / body joint [I]can[/I] sound fantastic – just make sure you audition in mono. Mono-compatibility doesn’t matter to a lot of folks, but it does to me – so I don’t use it.)

So that’s it. I’d like to read your comments and ideas. What strategies have you found successful? What about acoustic guitars that are intended to sit in a mix?

I am hugely tempted by an idea that popped into my head to visit the US next summer or autumn (Fall, dudes) and play a few places. I’m also considering combining with a family holiday – that is, I work and they holiday. For them it would by a bit of a mystery tour, the trip not having been arranged via the normal touristy methods. I reckon I can google for venues and send of a cd, or two, with a press-kit and maybe do some cold-calling. I’m used to this – or was. Although I do play gigs these days, they are none too frequent, are ad-hoc, and are offered rather than sought. Nevertheless, I have toured extensively in the past, particularly in Europe, so I’m no stranger to life on the road. But I have never played in the US.

Here are a few parameters that are in my head:

That’s the way I’m thinking at the moment.

This is hard to write about without is sounding like a bunch of baloney and excuses. And maybe there will be some truth in that – but i’m going to give it a shot, anyway.

If you have stumbled across some biographical material elsewhere you might have read that I quit playing in the early 80s. This coincided with a complete break from playing guitar and songwriting entirely for about 5 years. When I did get back to playing and writing I had lost pretty well all the contacts I had with promoters and agents who had helped me with gigs and tours in the past. Things had moved on and I would have had to pretty much start at the beginning again to build these contact and prerequisite reputation with new people. Well, in truth, I confess that didn’t have the appetite for that – and the bottom line was that there was no requirement for me to do it for the purposes of earning a living!

So now I’m living in the north-east of Scotland, whilst being a perfectly habitable corner of the planet (it’s that humped-shouldered part of the UK that sticks out into the North Sea), is not festooned with live music venues that an ‘umble fingerstyle acoustic guitar player like me would get paying work. Plans are afoot, though. Oh, yes, plans are afoot and I’ll confide about them here, ‘ere long…

Right, well, hills are important to me. If I can drag my ass out of bed and get enough coffee down my throat, there’s little I like better than spending a long day in the hills. So this part of the site will be about those pleasant days. For the time being, the items will be mostly retrospectives of hills “long ago and far away”.

These hills are called “mountains” in Scotland, but to many folks living in the US Rockies, or the Alps, they’re not considered to be real “mountains” and disdainfully dismissed due to their lack of altitude and height. Experienced mountaineers don’t hold this view and know that you underestimate them at your peril.

In the meantime, and until I sort out some photographs and upload theme to the server, here’s a nice pic of the approach to Beinn Mheadhoin through Glen Laoigh deep in the heart of the Cairngorms. Nice innit? I took the shot after I’d huffed and puffed my way to the top and sauntered back down again. The highest knob just above the patch of late snow is the summit. 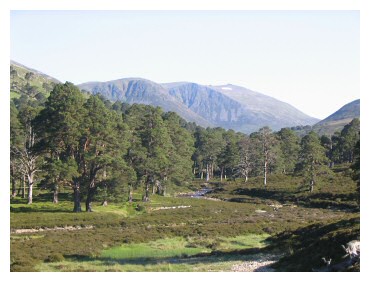 Category: In The Hills

This is the very first post here just to test and I should really delete it – but I’m not going to. So there.