I inherited this guitar from my father who passed away in ’92. He had harboured, I think, an aspiration to learn some classical guitar for a few years, already, and so bought in a store when he came to visit us in London one year. I think he viewed me as a guide with respect to the buying side.  In truth, I was all-at-sea with classical instruments, but at least I could judge its playability and make a rudimentary judgement about its sound. But an expert guide? Nah! 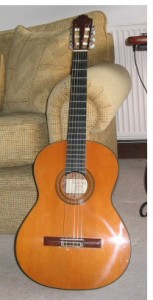 My father had a keen ear for music – particularly for the symphonies of Sibelius. I remember as a child hearing most of the great romantic symphonies and concertos – he had a penchant for conducting the radiogram during the climaxes of these works. I was very proud when I introduced him Mahler’s symphonies because he he took to them immediately with great enthusiasm. His reaction to his first hearing of the finale of the Resurrection Symphony was a joy to behold. I was amazed at the time that he hadn’t come across them before, but I understand now that Mahler has only become really well known relatively recently and, incredibly, was hardly known except to champions of his work when my father would have been building his record collection in the ’50s.

Anyway, all that aside, on the guitar he made a none too shabby stab at Cavatina (aka the theme from The Deer Hunter) which he learned from the notation with John William’s recording of the piece as a guide. If his playing was a little stiff, that was soley due to his taking up the instrument late in life – late sixties, as a matter of fact. He was a very musical guy and I miss him.

Interestingly, the guitar was “specially” made for Ivor Mairants Music Centre, London – which is where it was purchased. I don’t it much, if at all. I experimented with it some time ago using it as a second guitar on some of my recordings and while the sound was not unpleasing, it got discarded when I realised that I was a solo singer/songwriter. So the guitar is in danger of becoming an heirloom unless I decide to play it as an alternative guitar for some songs, or write some songs specifically for it. Outside of that, it does take jazz fingerstyle particularly well. I have never had any affinity for classical guitar music, and have no desire whatever to play any of its repertoire. So there it is. We’ll see…