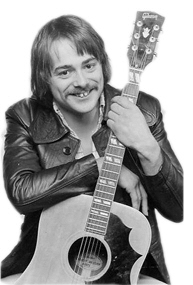 This guitar was the first “serious” guitar I owned. Prior to that, when still a kid, I had inherited my older brother’s little acoustic which my memory informs me I should have taken more care of. It eventually gave up the ghost after I broke it trying to fit it into an electric guitar case shortly after moving to London. So, an Eko 12-string (also brought down from Scotland) and a second-hand Framus 6-string later, I bought this well-used Gibson in a store in London from an aquaintance who worked there. It immediately had the adjustable saddle replaced for a fixed one, a new set of Schaller machine heads and some cosmetic work done round the soundhole (the previous owner had clearly been a robust flatpicker).

The guitar saw lots of action in the London folk club scene, as well as tours of Europe and the studio recording sessions for two LPs. It was the guitar that got locked in its case when I “retired” in the early 80s only to see the light of day some five years later when I made some tentative steps into writing and (half-heartedly) performing again.

One evening after playing at my local folk club in Twickenham, I put the guitar down on the pavement (sidewalk, dudes) by the passenger door of my car while I was chatting to a friend, fan, or creditor (I don’t recall which). At the conclusion of these pleasantries, I walked round the car, got in the driver’s side and drove away leaving the guitar abandoned to the night. Not for long however, because after no more than two minutes with the jolting realisation and accompanying rising horror, I executed an immediate and rather noisy U-turn to effect a return to the spot where I had placed the guitar on the pavement. It was gone.

Was this a particularly good guitar? I’ve listened so some recordings of it since and I have my doubts. I don’t remember thinking – or anybody remarking – that it had a killer sound to it. It certainly wasn’t a bad sounding guitar – far from it – but specially good? I dunno”¦ still, we were very attached to each other and I was heartbroken to lose it. I went through a bottle of whisky that night in Twickhenham trying to keep down the anger and frustration – and the rising panic at realising I no longer had anything to play.

It’s all far in the past now, but it’s one of these experiences that are like bookmarks in life. There are no published recordings of this guitar available (the two LPs are “nla”, and likely to remain so!) although a friend recently sent me an amateur recording of a complete concert I did in Germany in the late 70s. Curiously, the last songs written on it were Red John and The Spaniard, both of which are, of course, on Interim Reports.