In September 2005 the family needed to get away from the delights of Scottish autumnal weather so we headed of to Florida to put some colour in our pale British faces and just lie a back and get up to look around from time to time.

We did a bit of driving up and down the state of Florida and along the way spent a couple of days in Naples. This was for the express purpose of picking up an OM-18V at MyFavoriteGuitars. 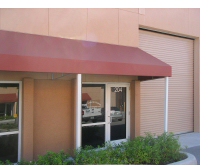 The proprietor, Jon, is a great guy to do business with and offers very competitive prices (plug).

Inside the store, I auditioned the OM-18V against a OO-18V and while they were both fine guitars, the OM won out in terms of loudness and depth of voice. “That’ll be the long-scale talkin'”, I told myself. Anyway, I spent a pleasant hour, or so, picking away on these guitars, with Jon even joining in for a spell (marvellous). 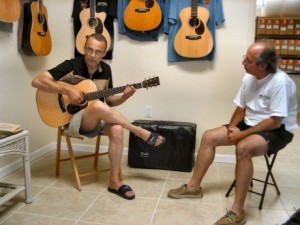 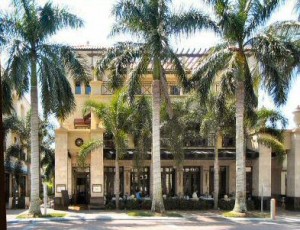 We walked about a bit, took some tourist pictures, and went back to the hotel where I ..erm “¦played some guitar “¦just for a while.

But here’s the real hero of this page, still reclined in its case in the store. 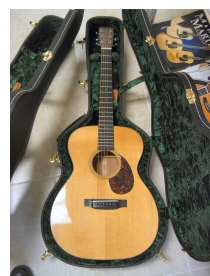 How does it sound? Well, as with all guitars there is much floral language written by some folks about the sonic pallette, or whatever, and while much of it is hogwash, I find I am in agreement with some of the commonly held opinions about the OM-18V. Here are a few of my opinions:

This is a loud guitar for it’s small body and is a match for any Dreadnaughts and Jumbos it finds itself in the same room with. In common with other guitars with mahogany back and sides it has a straightforward and direct tone; it doesn’t display the complex overtones commonly found in rosewood guitars. I find it to be a punchy sound with a very satisfying snap if played in a way to bring that out. It has plenty of bark and bite (sorry for the doggy analogies – better that than appealing to vocabulary used to describe wines!) but has plenty of authority in the bass. Now, that bass I would describe as a “grumble”, as compared to the “growl” (here, doggie, doggie!) of a rosewood equivelent. These mahogany / rosewood comparisons may seem fanciful, but afficionados will know I speaks not with forked tongue.

Feelwise, it’s as light as a feather. The longer scale (25.4″) and wider fingerboard (1 3/4″ at the nut) took a while to get accustomed to and it was some time before I was confident that I could play some of my things with more than a 80% success rate with respect to correct notes played! The beefier neck (“modified V”) didn’t bother me at all – which was a bit unexpected.

As you can see, it looks as plain as plain can be. Even the Martin decal on the headstock is subdued. It’s an ’18’ style guitar, so it’s never going to be fancy. Bling is not its strong suit (no pun). The ‘V’ suffix in the model designation designates it as a Vintage Series guitar meaning, in this case, that it’s a reissue of the (famous) OM-18 that was made in the 1930s. The history of OM guitars is fascinating (to me), but it’s not for here.

On Interim Reports this was the guitar used for Red John, Blah Blah Blues, Entropy, The Tumbler, A Little Bit Of Fun, and The Pretender. Aside from A Little Bit Of Fun, these are up-tempo songs and that’s no accident. I find my OM-18V, with its clarity of purpose, more suited to that kind of music than a guitar with a more “complex” sound, like my OOO-28 which prefers to meander down the byways, and dwell in the darker and more secretive corners, of the sonic universe. My OM-18V can take aggressive playing and can be pushed to limits that would be unreasonable to expect of some other guitars.

That’s about it regarding this get-up-and-slap-your-face guitar. A cheeky guitar certainly, but with a sunny disposition.