The Keir clan moved from London to the north-east of Scotland in 1992 and to the Banchory area in 1994. In the same year I resolved to set up a modest recording studio in the home for the sole purpose of recording the eighty or so songs that had accumulated during the years of playing, touring and during my self-imposed “retirement” in the ’80s. I had recorded two LPs in the earlier days and had done demos in a number of studios which varied from the massive Chappell facility in Oxford Street, London, to small independent outfits in London and the surrounds. Nevertheless, and despite reading magazines like Sound-On-Sound just out of curiosity and interest, I was totally inexperienced in the technical side and knew nobody from whom I could get advice or practical help. This was also before the time of bulletin boards and internet forums which since have become such an important source of information and inspiration to me. On the other hand, I knew from scouring the pages of Sound On Sound what a recording console did and what a compressor was and absorbed some theory and practical advice about recording and mixing, etc. I also perused advertisements and equipment reviews which provided me with at least some perspective of what was possible to obtain for a pretty limited budget. I eventually reached a point where I considered I could “talk” a good studio. Whether I could “walk the walk” would remain to be seen. 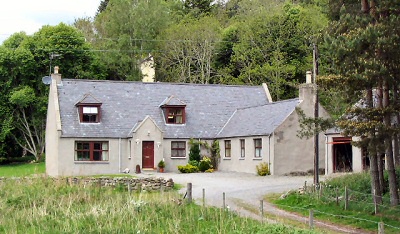 The above is a picture of the home in which the studio resides. It’s actually facing out from the other side of the building, but this side is the prettier. It’s very quiet with no passing traffic – in fact the only noise disturbance is from birds in the early morning and evening. Doing anything recording-wise during these times is an impossibility. I’ve quite often had an otherwise perfect take ruined by a single “tweet” or “chirrup” during the fading embers of a last chord. 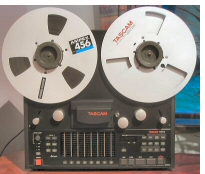 Eventually, and with the kind permission of my wife, I place and order with a London company and took delivery of a Tascam TSR-8 recorder, an Allen & Heath GS3 console, AKG C1000 and Audio Technica AT4033 microphones, some Behringer dynamics outboard, a Lexicon Reflex reverb unit, a Sony DAT recorder, and a whole lot of cables and interconnects. Oh yes, and a pair of JBL 4208 nearfield monitors. Everybody knows how much fun it is connecting up and plugging in a new hi-fi or home entertainment system. I was delirious. My wife hadn’t experienced so much cardboard, polystyrene and polythene in one place before. Well, neither had I but I tried to look like I knew what I was doing. Being always the methodical type, I carefully read the instruction manuals and took all necessary precautions before pressing any buttons so I avoided blowing anything up. In fact, exploring the anatomy of a 16-track recording console for real for the first time was an absorbing and exciting experience. New toys. But it was real and I felt strangely emancipated. 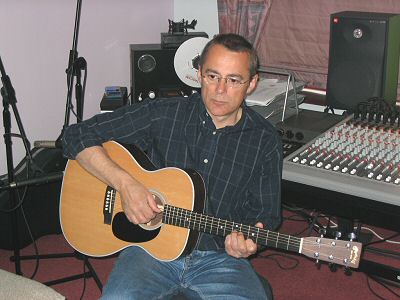 In the pictures above and below you can see the recorder, console and monitors piled at one end of the room – the rest of the room being the “recording space”. The Tascam had a hard-wired remote control with punch-in/punch-out, pre- and post-roll, rehearsal, and location recall all which enabled profession standard tracking and mixing a realistic possibility. The Tascam was a good, robust and reliable half-inch, 8-track machine, and, as I was to learn, has a fine reputation – and I miss it a little. 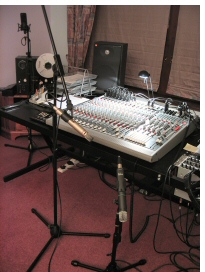 I have to say that my early attempts at actually recording some songs are now best seen retrospectively as part of a necessary learning process guided by pure trial and error. I realised it would take time and dedicated practice and I was therefore not too discouraged about these early results. The biggest gap in my knowledge was undoubtedly in the area of room acoustics and how the nature of the room is the biggest variable in determining the quality of the recorded sound. A really experience and skilful engineer might be able to work around limitations imposed by the recording space – but I was not one of them.

Interestingly, I had come to know some local folk musicians and a few were keen to come to the studio and have some fun recording their own stuff. One of these musicians, a very fine fiddle player, who thought enough of my setup and modest engineering skills decided on a project, with an acoustic guitar player, to record some tunes which if good enough might be released as a CD. I think I was as surprised as they were how well those recordings turned out given the resources and in September, 2006, Karen Steven released “Dance On The Fiddle” which, to my knowledge, has enjoyed some success. Karen has since moved on and is still successfully recording and I indulge my vanity a little in hoping her time at my place has contributed a little to that.

For my own part, the efforts to record my own songs with any expectation of achieving professional results ground to a halt and the studio entered a more or less dormant phase which lasted a few years. Additionally, I was becoming increasingly aware that technology had moved on apace and that both the type and quality of the equipment I was using was inhibiting my efforts. If I was to ever to record all those songs, I had to reassess what I was doing, how I was doing it, and what I was doing it with. Funds were still a factor to be considered so careful research and planning were essential before I dared spend more significant sums of money (to me) on the venture. It was indeed a conundrum how to justify this given the meagre tangible results achieved through the previous investment. Nevertheless, trawling through internet forums gave me a wealth of insights that had not been possible before, and before too long I was confident I had absorbed enough to be able to make some intelligent decisions. Luckily, Ebay provided some resource by way of disposing of the Tascam tape recorder, the AKG mics and the Behringer outboard gear. It had become clear to me that the studio needed to go wholly digital with the control and ergonomics that technology offered. The facilities available with a digital setup were truly astonishing ““ particularly when considering the low relative cost. I also had a new acronym to play with: DAW – Digital Audio Workstation – which I laughingly referred to as Discount Analogue Workaround on one internet forum in acknowledgement of the disdain with which digital is still held in the minds of analogue aficionados and diehards.

So out came the credit card and in came a whole bunch of computer components and software. I have to acknowledge that the computer side of things would have been a lot more difficult were it not for the help and mentoring of my son who knew about such matters! The resulting setup was pretty much what it remains today, bar a couple of upgrades here and there. The following, then, is the spec. of the studio right now:

What’s left? Oh, yes; the most important piece of equipment of all: acoustic treatment! In May 2006 (during the production of “Interim Reports”) and after scouring specialist internet forums and reading about what other people, similarly placed, were doing, I obtained six packs of four (or was it four packs of six?) Rosksil RS60 mineral wool slabs which, while normally used for insulation in homes, is ideally suited for installation in studios for its sound absorption properties – particularly in frequency bands associated with the resonant modes of small rooms. I had learned that this stuff is particularly effective if you take each of the slabs (approx 4 x 2 ft) and cut them into 2 x 2 squares which are then each cut diagonally into triangles and stacked in the corners of a room. 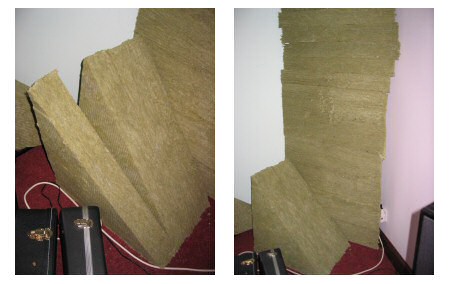 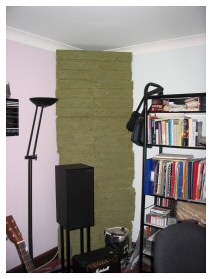 So that’s what I did. In due course, triangular slabs of mineral wool were stacked, one on top of the other, floor to ceiling in each of the four corners of the room. They can (should) be, for cosmetic reasons alone, covered in some manner with breathable fabric of your colour and design of choice. This last I have yet to accomplish, not being, how shall I say, DIY competent apart from the easiest of tasks into which cutting slabs of mineral wool into triangles and piling them on top of each other fortunately falls.

Well, I have no doubt that future acquisitions and upgrades will happen on a frequent basis. The knowledgeable reader will spot obvious weaknesses and most effective upgrade paths in the list, and will be muttering about preamps and plugins underneath his breath as he reads this ““ yes, yes, I know – patience, please ““ or maybe a bit of venture capital? Ha! Well, there it is then. We do what we do with the tools we have. Actually, the weakest link in the chain is one not listed above: it is me – the “engineer” and “producer” –  and time spent learning and practising those crafts will still, for some time to come, be the best investment of all!